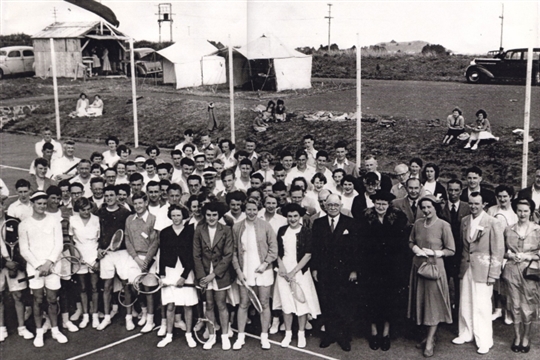 White Trousers & Jackets for the men – Dresses for the ladies !

In 1947 Auckland City Council gave the Club permission to develop the land on Kupe Reserve. The Club was officially opened by the Mayor and Mayoress, Sir John and Lady Allum. There were 40 members and the clubhouse was initially a wooden car case, as depicted in the photograrph.

Within 10 years membership had grown to 80 members. Social events were high on the list with weekly table tennis nights and card evenings over the winter season.

Minutes record that every member must take responsibility for any breakages by balls to windows which occur during organised club play.

Midweek ladies were a strong part of the Club. Their membership was £1.10 but no tennis balls were supplied!

In 1961 President Arkell formed the Orakei Racketeers Club made up of older aged businessmen. In time they became the major financial backbone of the Club and were instrumental in raising funds for the installation of floodlights – lighting poles from the dis-used tram tracks in Queen Street. Eastern Suburbs’ first floodlit courts were opened in 1963 by Mayor Robinson and MP Rob Muldoon.

Sadly, by 1969 membership declined to such an extent that the Club went into recess and it was not until 1972 that 50 newly found members got the club up and running again. Membership was now $17.00 p.a. Annual picnics were the order of the day – catching the Blue Boat to Motuihe or hiring a bus to Orewa.

Short shorts for the men – and big hair for the ladies !

1982 saw the opening of the new clubhouse with money raised from a car raffle.

By 1985 membership was so high at 650 players that a waiting list was begun. The 1990’s saw a major redevelopment at the club with redecoration of the clubrooms, a further 3 new courts laid; all floodlit.

We weren’t left behind with the excesses of the 90’s – Black Tie Christmas balls at the Recent Hotel and parties at the Empire Tavern. Dinners at Sergio Olla’s restaurant Sergio’s in Newmarket and Antonio Olla’s restaurant Vesuvio in Karanghape Road.

In November 1981 Orakei Tennis Club hosted one of the richest tennis events organised by any club in Auckland with prizes totalling $1,000. Top seed was NZ Davis Cup player Bruce Derlin. Derlin defeated fellow left hander David Mustard in the final held at Stanley Street. The limelight was almost stolen by Fed Cup player Brenda Perry who won the right to play in the exclusive men’s tournament.